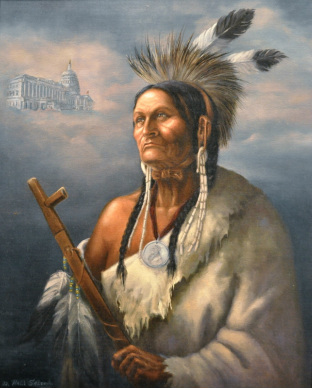 As a tribal member of the Red Cliff Band of Lake Superior Chippewa Indians, Dore' has been inspired to capture many Native American scenes in her artwork. Dorothy is a descendant of Chief Buffalo.

Chief Buffalo is recognized in history when in 1852 he helped lead a tribal delegation traveling from Wisconsin to Washington, D.C. in an effort to stop the removal of the Lake Superior Chippewa people from their land.

A bust of this great hero can be seen at the entrance into the United States Senate.  There is also a statute of him in the House of Representatives.